Not everyone thinks spending a Sunday in a swamp as an ideal activity, but I do.  This week I was lucky enough to check out a swamp in the  Apalachicola State Forest with two biologists. Being in such a diverse environment was a joy and hanging out with such knowledgeable people made it even better!  This wasn’t my first time in a swampy environment but it was my first time in a southern swamp.  As a forested wetland, swamps have fluctuating water levels with mounds of semi dry land also known as hydric hammocks. Swamps can vary from brackish water to fresh water and also be transitional shrub swamps (which is what I’m accustomed to up north). Historically, swamps were viewed as unproductive land with little to no use to farmers and developers. Today these rich environments are being recognized as important key pieces to our ecosystems. They provide critical habitats for many organisms (including fish nurseries in floodplain swamps) as well as fresh water and oxygen to surrounding areas.

After about an hour drive, we pulled over and entered a short soggy path that quickly turned into mid-calf water. Of course I was wearing boots but it really didn’t matter because after a few steps, mid-calf water turned into mid-thigh in water.  The biologist who uses this area as a regular study site casually mentioned that the water levels were abnormally high. 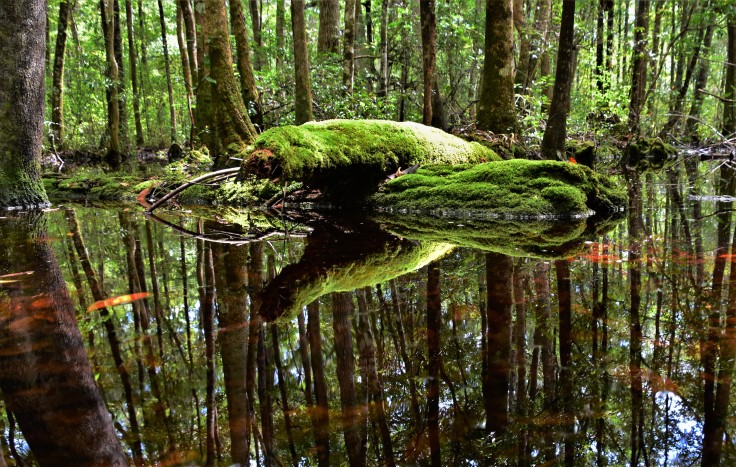 Speaking of water, there were beautiful red and orange hues reflecting from the detritus below which I thought gave the area a mystical feel.   I imagined these colors were the result of swamp fairies sprinkling whatever it is that fairies sprinkle… but in reality, these colors were a product of the suns reflection and the tannins present in the water. During that moment I also thought I should stop imagining things before I end up face down in this “mystical” water.

Within the diversity of trees, it was the Sweetbay magnolia (Magnolia virginiana)  that seemed to be the most abundant and as expected, the mosses were beautifully diverse.

Since I was in a southern swamp, I was hoping to see a cottonmouth snake but no luck this time – thankfully we did find what we set out to see – the southern dusky salamander (Desmognathus auriculatus). We found them by digging through mucky leaf litter along the hammocks.  Normally I would show you what they look like with my own image but unlike the salamanders in the northeast, the southern duskys are FAST!   Catching them was no easy feat (sigh* I thought I caught one but I actually only caught a handful of muck) so taking a picture was simply impossible.

Dusky’s are about 3-6 inches long with hind legs larger than the front. They feed on a variety of tiny aquatic vertebrates and breed from September to October. They are typically dark brown almost black and they have the loveliest speckled bellies. One of the biologists I was with described the speckles as the night sky; I thought that was pretty accurate. Unfortunately, southern dusky populations are in decline and at some locations have completely disappeared. The cause is still in question but thankfully we have biologist working diligently to find out why and how to conserve these speckled bellied cuties.

I hope you enjoyed this post – get outdoors & do something great!